Conservatism and The Confederate Flag

In a short break from the series of posts on Conservatism. . .

The vile and disgusting murder of nine church members by Dylann Roof has spawned a number of so-called "national conversations"--you know-- the ones in which everyone engages in a monologue of ideological sound bites instead of a dialogue that seriously explores alternative views. One of the latest involves revisiting the Confederate battle flag.

Here is my monologue.

Most black Americans see the flag as a symbol of hate. The battle flag originated in the American Civil War. That contest began, of course, when Southern states seceded from the Union to protect slavery from interference by a new political party that had captured control of the White House and both houses of Congress--the Republican Party.

Southerners resurrected the flag in the 1950s in reaction to the Brown vs. Board of Education decision by the Supreme Court that ruled segregated schools violated the United States Constitution and the subsequent efforts of the federal government to enforce that decision. The flag was incorporated into the state flags of many Southern states during this time period by Democratic governors and Democratic controlled state legislatures. It seems no one cared about the issue until Republicans began winning control of state governments. Then the Confederate flag became a controversy.

It doesn't take much empathy for one's fellow citizens to see why black Americans take offense at the display of that flag.

For many white Americans, the flag is a symbol Southern pride or Southern culture.

That's the wonderful thing about symbols: its all inside the head. (One witnesses the same fantasy when people burn the American flag over something is symbolizes in their imagination.)

There is one incontrovertible  fact, however, about what the battle flag symbolizes.

As the Confederate battle flag, it served as the banner under which Southern armies fought in their attempt to break up the United States over the election of the Republican Party in  1860.

That ought to be grounds enough for any self-respecting Republican to oppose the display of that flag in any official capacity that represents a state government. And Republicans need to point out who hoisted the flag in the first place--the Democrats.

When running for president, Barack Obama said that the Confederate flag should be confined to a museum.

That's right Mr. President. Put it in a museum dedicated to the rich history of the Democratic Party. 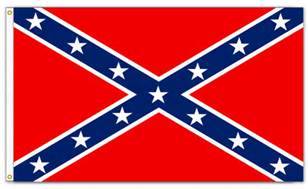 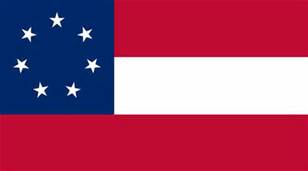 Posted by RightDetour at 7:04 PM