A re-post from last Christmas:

With Christmas behind, a few reflections:


It goes without saying that Christmas traditions vary era to era and family to family. (But I guess I said it anyway.) One constant, however, is the focus on the children.


Some parents, probably a plurality, create anticipation for the holiday by reading A Visit from St. Nicholas to their enraptured children. They help compose a letter to Santa or make a personal call on him at the local mall to work out an agreement on gifts. They change the car radio station from the classic rock station to the 24 hour Christmas music station, where the horns blare, the strings reach a crescendo, and Andy Williams croons, “It's the most wonderful time of the year.” (And for Andy Williams, it IS the most wonderful time of the year. It's the only time of the year that he gets  radio play anymore.) Eventually, those children grow skeptical of the claim that reindeer fly or that Santa can fit down the chimney flue.

Other parents create the anticipation for the holiday with advent calendars that countdown the days to the arrival of the Christ child. Their worship services at church begin to incorporate holiday themes. Perhaps a reading of Matthew and Luke's accounts of the birth of Jesus takes place Christmas eve or Christmas morn before exchanging gifts. The gift giving may be construed as an imitation of God's give to man or the gifts of the wise men to the infant Christ child. Later, some of these children, too, may experience a more psychologically traumatic skepticism about those accounts from Matthew and Luke to which they listened growing up.

An interesting change in the “sounds of the season” has taken place over the years. I mean the sounds on the street. I remember the sounds of carolers in the neighborhood in which I grew up. I cannot recall if this occurred every season or just the one that I still remember. One evening it moved several us to get our coats on go caroling ourselves. At least on one evening we did not make it very far. After singing outside the home of one of our friends, we received an invitation in to drink hot chocolate. Once we entered the house, our caroling itinerary ceased.

Another change in the “sounds of the season” manifests itself Christmas morning. The streets used to be a noisy place. Every Christmas morning, after the neighborhood kids opened their presents, they spilled out of their houses into the streets. Children were everywhere with footballs, baseballs, skateboards, mock firearms, remote control cars, bicycles, dolls, baby strollers, etc. Now the streets have an eerie silence. I know that kids live in my neighborhood; I see them each school day waiting at the bus stops. But Christmas morning no kids can be found anywhere.


I imagine they are sitting in front of their television screens and video game platforms or computers. Instead of skateboards, they own a Tony Hawk video simulation. Instead of creeping silently around they neighborhood with their plastic M-1 carbines, helmet, and back-packs or manipulating their G.I. Joes, they direct a platoon in Call of Duty or Halo. Instead of assembling a couple of teams for front yard foot ball, they coach an NFL franchise with Madden NFL Football. There is probably a video game out in which a young girl feeds and changes the diaper on a virtual baby instead of an actual doll. (Or else she has a REAL baby of her own.)

Its not just silent night anymore. Its silent morn.

The Reasons for the Season


Well, maybe not. It used to be Saturnalia. But with the emergence of a small Judean religious sect and its remarkable growth in adherents in the West that far exceeded its adherents in its native land, Saturnalia is all but forgotten.


They have taken Saturn out of Saturnalia.


Saturn is the name of the Roman god of agriculture and harvest. He is associated with the goddess of plenty. The weekly time of partying, Saturday, is named for him.


Between December 17 and 23, Romans honored him with a feast. Romans decorated the trees on the grounds of their villas. They ate, drank, exchanged gifts, and made merry by saying “Lo! Saturnalia.” Slaves and their owners exchanged roles. The slaveholders served and the slaves enjoyed being served.

The holiday also served as a transition into the celebration of the Dies Natalis Sol Invictus, or Birthday of the Unconquerable Sun. This latter festival honored the birthday of the sun god, which fell on December 25, the date of the winter solstice according to the old Julian calendar. Disagreement exists over how early and in what form worship of the sun took place. 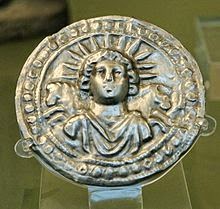 
Meanwhile, Christianity spread throughout the Roman Empire. The resurrection emerged as the most important Christian festival because of its theological importance. In addition, the Church more easily could settle on a date since the crucifixion and resurrection coincided with the Hebrew Passover Feast. Over several decades, however, the celebration of the birth of Jesus grew in importance. But the church celebrated it on different days in different parts of the empire. The Church in Rome celebrated the day on December 25, possibly based upon calculations by Pope Julius 1. As Rome grew and achieved primacy over the rest of the church in its theology and authority, the December 25 date became standard through out the Church for “Christ’s Mass” or Christmas.


No direct evidence suggests that the Church authorities chose the date to obscure the pagan festivals of Saturnalia or Sol Invictus. But some church fathers noted the coincidence. Cyprian (?-258) noted “How wonderfully acted providence that on the day when that sun was born, Christ should be born.” In addition, Chrysostom wrote that “Our Lord, too, is born in the month of December. But they call it the 'Birthday of the Unconquered.' But who indeed is unconquered as our Lord?”


As Christianity spread, Christmas became intermingled with additional pagan winter celebration traditions: yule logs, mistletoe, and Christmas trees. Today it offers a syncretistic something for everyone.


Posted by RightDetour at 8:05 PM No comments: