Have a Happy, er, Haunted Halloween

Happy or Haunted Halloween--that syncretistic season in which pagan and Christian traditions meet, offering something for everyone.

Halloween, or Hallows eve, is the evening before the celebration of All Saints Day in the Catholic Church. Hallow, of course, is an old English word meaning holy or saint, as in the passage from the Lord's Prayer “hallowed be thy name.” All Saints Day, or All Hallows, originated when when Pope Boniface IV consecrated the Pantheon at Rome to Saint Mary and all the martyrs of the church on May 13, 609. It set aside that day to remember those who died in faith. The Pope probably chose this date in an attempt to suppress a Roman pagan day of the dead called the Feast of Lemures. In this pre-Christian holiday, Roman citizens cleansed their homes of spirits of lost souls by an offering of beans. Later Pope Gregory III began a tradition of remembering the faithful dead on November 1. Many decades passed, however, before Europe more uniformly recognized this new date.

Interestingly, November 1 fell on the same day as a Celtic day of the dead festival called Samhain. This marked the end of the harvest and the beginning of the Celtic new year. The Irish recognized the day with the burning bonfires, lighting candles in hollowed out turnips, and dressing is disguise to ward off spirits of the dead. Adults and children practiced “guising” by going house to house costumed in disguise offering entertainment in return for food and money. And Celtic priests led processions to the village gates to leave food offerings to ward away spirits.


In North America this tradition continued with the lighting of pumpkins and children “guising” door to door requesting “treats” with the implied threat that a “trick” may follow if the one does not comply with the demand for a treat.


In light of the pagan origins of Halloween customs, churches have approached the day differently according to their own traditions. Some mainline Protestant denominations retain All Saint's Day on their calendar of religious holidays. Other more traditional reformed churches recognize Reformation Day instead. On October 31, 1517  Martin Luther began the Protestant Reformation by posting his protests against several practices of the Catholic Church on the door of All Saint's Church in Wittenberg.


And then there's those churches who use the season for evangelism by creating their own versions of haunted houses . These houses usually sport the name "Tribulation House" or "Hell House" and  dramatically portray the "Good News" of the great tribulation and damnation. Below is a clip for one from a few years ago.


Personally, I participate on a strictly limited basis.

I put out  a small table.

I post a sign explaining that I had to go out of town, but that I left this large bowl of candy for all the "trick or treaters."

I urge them to be honest on only take one piece.

Then I place an empty bowl on the table and turn out the lights.

Now I am ready for Halloween 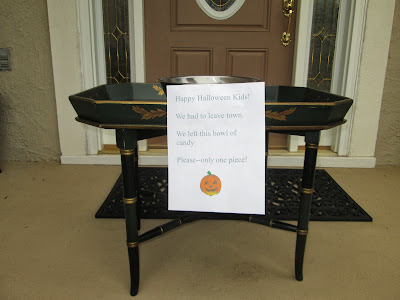 So happy Halloween! Er Lemuria. Er Samhain.
Posted by RightDetour at 6:53 AM 4 comments: