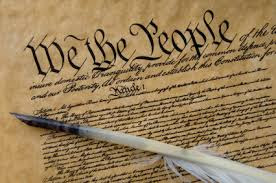 Between May 25 and September 17, 1787, fifty-five men attended a convention in Philadelphia representing twelve of thirteen American states. The purpose of the convention was to propose revisions to the existing constitution called the Articles of Confederation. This original constitution loosely bound the former colonies together into a "league of friendhship." Instead, they wrote an entirely new constitution creating government like no other in the history of the world.

It is now one of the oldest written constitutions.

Happy Constitution Day!
Posted by RightDetour at 9:11 AM No comments: