Courtesy of the Gateway Pundit, a photo of 18,000 soldier assembled "in formation" to honor Lady Liberty at Fort Dodge near Des Moines, Iowa in 1918. 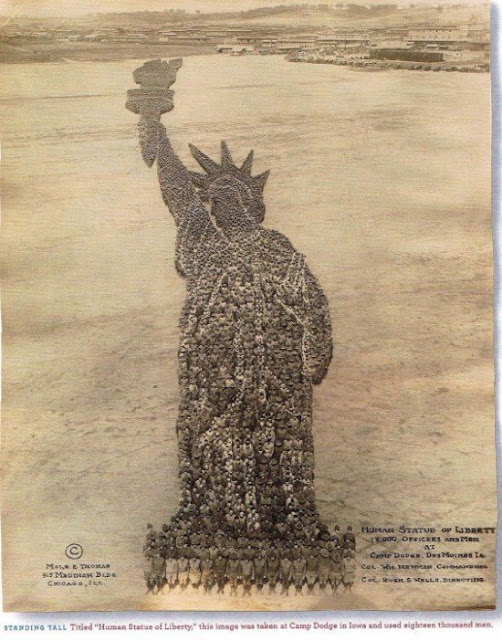 From the beginning of his Presidential candidacy, Barack Obama and his political team has exhibited an extraordinarily strong "Media Mojo." Partly owing to an accommodating mainstream media, the Obama campaigns and the administration has been largely successful in shaping the narrative surrounding our most pressing issues and public controversies.

After Benghazi, the IRS admission of applying extra scrutiny to conservative applications for non-profit status, and the Justice Department seizure of phone records of Associated Press reporters in its attempts to identify the sources of new leaks, even the mainstream media begins to take note.

Has the President and his team finally lost its "Media Mojo?"

Are the rest of Americans finally understanding what the Tea Party has been saying since 2008?

Posted by RightDetour at 7:59 AM 4 comments:

CNN reports that revenge  served as  the motive behind the bombings at the Boston Marathon. According  to CNN, Dzhokhar Tsarnaev scribbled a note asserting that claim while pinned down by police inside a boat. Tsarnaev reiterated his assertions in subsequent interviews with police after his capture.

Tsarnaev said that he and his now dead brother sought payback for the deaths caused by the military interventions in Muslim lands. He sees an attack on one Muslim as an attack on all. (I guess this does not include savage attacks on Muslims by fellow Muslims.)

Interestingly, this revelation comes a couple of weeks after Weather Underground member and domestic terrorist William Ayers denied any resemblance between the actions of his cohorts and those of the Tsarnaev brothers.

"To conflate a group of fundamentalist people who are nihilistic in some way with a group of people who spend their lives trying to oppose the murder of 6,000 people a week . . . and still the killing went on. What would you have done?"

He tries to contrast the Weather Underground's  idealism with the Tsarnaev's nihilism.

Now that the surviving Tsarnaev brother has explained his motive, the distinction Ayers draws seems more blurred. Tsarnaev's motive appears just as idealistic as that of Ayers.

They both strike back at the United States on behalf of people they perceive as its victims and, perhaps  more explicitly in Ayers case, change government policy.

If Ayers can convince himself, I guess that's all that matters.

As the controversy about the Obama administration's handling of the terrorist attacks on our consulate in Benghazi, Libya heats up, two more scandals come to light about  the most transparent administration in history.

First, the IRS admitted to applying extraordinary scrutiny to applications for non-profit tax exempt status submitted by organizations affiliated with the "Tea Party Movement." The IRS office in Cincinnati, Ohio responsible for examining applications for tax exempt status interpreted phrases in the names of the organizations or their mission statements such as patriots, tea party, constitution, etc. as "red flags" to apply additional scrutiny to such applications.

Others claim that only lower level agents made the decisions. A recently released IRS Inspector General Report, however, notes that front line upper level managers made the decisions. Moreover, acting director of the IRS Steven Miller lied about it when testifying during Congressional hearings.


In a press conference, President Obama claimed that he had "no patience for it" and that he "will not tolerate it." The FBI has begun its own investigation.

Second, administration admitted to seizing phones records of reporters for the Associated Press news syndicate. In contrast to the administration's condemnation of IRS policies regarding the tea party movement, the Obama administration defended the IRS seizures as a matter of national security. The administration sought to identify who leaked information about thwarted terrorist plots.

The attempt to stop information leaks from the administration resembles the efforts of the old "White House Plumbers" assigned the task to stopping "leaks" in the Nixon administration.

Posted by RightDetour at 6:46 AM 2 comments:

A couple of years ago, I began this blog with a look at the beginning of this nation: the Declaration of Independence. In one of those posts, I linked the ideas of the Declaration with our unique conception of national identity. We are not a nation in the traditional sense. We are an idea.

Our national identity as Americans is wrapped up no so much in who we are, but in what we believe. That is why when some Americans adopt beliefs too far from the mainstream, we call them "un-American."

Sometimes this sense of identity based upon beliefs is applied in unexpected ways. For example, ethnic groups in America--or at least the elites who serve as the self-appointed spokespersons for ethnic groups--will attempt to impose a set of beliefs to serve as a litmus test for assessing the "authenticity" of another's membership in that ethnic group.

This has long been true of black Americans. Elite spokespersons have established a set of beliefs to which they expect other black Americans to adhere. They ostracize group members who deviate from this set of beliefs, sometimes calling them "Uncle Tom." Based upon the main character in the famous Harriet Beecher Stowe novel Uncle Tom's Cabin, the name evokes the image of a man who is subservient to whites and exhibits no sense of pride or dignity in his own ethnic heritage.

We such more of this developing in the fastest growing ethnic minority: Hispanic Americans.

In a recent appearance on ABC's This Week, former New Mexico governor Bill Richardson asserted that Texas Senator Ted Cruz should not be considered a Hispanic American. Why not? Has he made false claims about his genealogy and ethnic heritage?

No. He simply advocates unacceptable political policies and expresses in views in a manner with which Richardson disagrees.

"Almost every Hispanic in the country wants to see immigration reform. No, I don't think he should be defined as a Hispanic. He's a politician from Texas, a conservative state. And I respect Texas' choice. But what I don't like is when you try to get things done--it's OK to be strong and state your views, your ideology, but I've seen him demean the office, but rude to other senators, not be part of, I think, the civility that is really needed in Washington."

Aside from the empty content of the passage above (who doesn't want immigration reform? We just do not agree on what those reforms should be), he essentially is calling Cruz as Hispanic "Uncle Tom, " or, if you will,