The Shadow of Bush . . . And A Thing Obama Did Right

And while on the subject of Bush, some observations on his foreign policy and another thing Obama did right:

Bush made a good call in holding Afghanistan responsible for the terrorist attacks on the World Trade Center and the Pentagon. During the previous four decades, many terrorist attacks against the United States or its citizens went unanswered. American leaders made legalistic distinctions between terrorist groups and the independent nations that harbored them. Our leaders wrung their hands with anxiety about holding host nations responsible for the terrorist attacks that originated from groups they hosted. Consequently, many of these attacks went unanswered. Unfortunately, it took the deaths of 3,000 Americans for our government to overcome their angst and hold a foreign government accountable.

Team Bush started out well, assisting the so-called Northern Alliance in their decades long fight against the Taliban. Once the Alliance drove the Taliban from power and cornered Osama bin Laden, things went awry. Instead of committing the necessary forces to take down bin Laden and bring a quick ending to the war, Team Bush decided to pay off some local warlords millions of dollars to catch bin Laden for us. They took the money, of course, and let him escape to Pakistan rather than turn him over to the infidels. As Peter Bergen told it:

“Yet, even as bin Laden contemplated his own death and Al Qaeda seemed on the verge of defeat, Gary Berntsen, then commander of CIA operations in eastern Afghanistan, was worried. A gung-ho officer who speaks Dari, the local Afghan language, Berntsen realized that Afghan soldiers were likely not up to the task of taking on Al Qaeda's hard core at Tora Bora. In the first days of December, he had requested a battalion of Rangers--that is, between 600 and 800 soldiers--to assault the complex of caves where bin Laden and his lieutenants were believed to be hiding and to block their escape routes. That request was denied by the Pentagon, for reasons that have never been fully clarified. In the end, there were probably more journalists at Tora Bora than the 50 or so Delta and Green Beret soldiers who participated in the fight.

And so the task of encircling the area was passed off to local warlords--one of whom declared a truce with Al Qaeda at a critical moment in the battle, allowing members of the group to slip away. Muhammad Musa, a massively built, laconic Afghan commander who led several hundred of his soldiers on the Tora Bora front line, told me, "There were six American soldiers with us, U.S. Special Forces. They coordinated the air strikes. My personal view is if they had blocked the way out to Pakistan, Al Qaeda would not have had a way to escape." The strategy of relying on local proxies--a tactic that had served America so well in overthrowing the Taliban--proved disastrous at the Afghan campaign's crucial moment.

Everyone knows what happened next: Al Qaeda's leaders fled into the tribal areas of western Pakistan, where they began the long process of rebuilding their devastated organization. That process has gone far better than they could possibly have imagined as they slipped out of Afghanistan in late 2001 to the hum of American munitions blowing apart their last refuge in a country that had once, more or less, been theirs”

Instead of taking down bin Laden and coming home, Team Bush decided to begin a project of "nation-building" in a land where no real modern nation-state existed.

Then Team Bush focused on Iraq. Although 15 of the 19 lunatics who hijacked those planes came from Saudi Arabia, Team Bush asked no tough questions from the Saudis. Even after the Saudi family's Prince Alaweed bin Talal blamed U.S. Foreign policy for the attacks and Saudi Minister of the Interior Prince Nayef Ibn Abd Al-Aziz blamed the Jews, Team Bush had nothing to say to or about Saudi Arabia. It appears all that hand-holdin' and lip smackin' between Bush the Saud family members paid off. 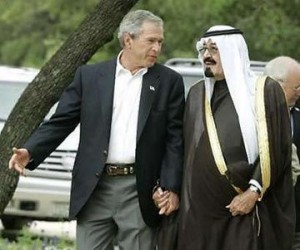 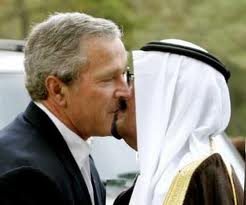 Instead of confronting Saudi Arabia, Team Bush began beating the drums for war against Iraq, a nation that had nothing to do with 9/11. That war, too, turned into another project of "nation-building."

Only time will tell if the Bush plan to install democracy in two regions under Islamic rule for 1,500 hundred years will pay off. One must hope so. I suspect both will experience coups by military or religious parties after we leave.

Meanwhile, during that time presidential candidate Senator Barack Obama took heat from Republicans regarding comments he made about getting tough with Pakistan. He suggested that we should take the war on terror to Pakistan, with or without that government's permission.


Republicans howled about violating the sovereignty of our so-called ally.

We saw how that turned out:

Posted by RightDetour at 7:22 AM 3 comments: Links to this post

The Shadow of George Bush

With the passage of the ironically titled American Taxpayer Relief Act of 2012, Congress has avoided—at least temporarily—the severe spending cuts and tax increased required under the Budget Control Act of 2011. In addition, Congressmen loaded the bill will pork to award diverse special interests.

In the course of passing this legislation, Congress retained some of the Bush administration tax cuts. Some conservatives critics of the deal expressed relief that it preserved some of the Bush “legacy.” The fight over the tax cuts created the stalemate that delayed action until the eleventh hour. Although the Republicans tried to put the spotlight on the issue of taxes, the issue was really just a sideshow in our Congressional Carnival.

The Republicans should have conceded immediately the President's desire to let the tax cuts expire. Republicans subsequently should have demanded spending reductions. That way, Republicans avoid confirming the suspicion of many voters that they are for “The Rich.” More important, Republican can focus on the real issue.

Taxes are not the real issue. Its spending.

And how the Bush era tax cuts became such a sacred cow mystifies me. They were the residue of the undisciplined and fiscally irresponsible Bush administration, one of the worst in recent memory.

What was so bad about Bush?

He was a liberal.

He called himself a “compassionate conservative,” bringing a kinder, gentler, conservatism to American public life. Kinder and gentler than who? Well, Ronald Reagan. As George Will put it, Bush set out to “distinguish himself from Reagan by disparaging Reagan.”

While trying to enhance the success of the Republican Party, Bush threw out whatever inconvenient conservative principles

When he came into office, Bush inherited a budget surplus (depending, of course, on who counts and what is counted.) The United States government still carried a five billion dollar debt from borrowing during previous administrations. Instead of attempting to pay off the debt with surplus revenue, Bush introduced tax cuts that eventually amounted to about 1.5 billion dollars. We began running budget deficits.

In addition to cutting tax rates, Bush secured a tax rebate. He promoted this gimmick to stimulate the economy. One shot deals like this never work. Most recipients paid off existing personal debt (thereby exhibiting better sense about their own household budgets than Bush showed regarding the federal budget). Other simply put the money away for some future purchase.

The tax cuts, however, only tell part of the story.

The spending side of the budget looks no better.

He increased domestic spending across the board and brought about a large expansion of the workforce of the federal bureaucracy.

The largest of these expenditures was the Medicare Prescription Drug Improvement and Modernization Act of 2003 that created the Medicare Part D prescription drug program. In an age in which reform of existing entitlements grows increasingly urgent, Bush saddled us with a new one. Not only did the program saddle future generations with unaffordable obligations, because of the way lawmakers wrote the legislation, billions of dollars in subsidies went to companies who already provided prescription drug coverage, including GM (4 billion), Verizon (1.3 billion), Bell South (572 million), American Airlines (415 million), and United Airlines (280 million).

Bush also bought into the “affordable housing” mantra of the Social Democrats:

He supported the role of Fannie Mae and Freddie Mac to support mortgage lending to those who cannot afford it. Bush's policies partly caused the housing bubble and subsequent crash that brought his administration to an ignominious end and swept the Democrats into power in the White house and in Congress.

His last acts of “compassionate conservatism” included the bailouts.

Bush has become our Jimmy Carter.

There is a reason behind it.

Bush was, like Carter, simply one of the worst Presidents since the turn of the 20th century.

Posted by RightDetour at 3:31 PM 5 comments: Links to this post